I have said, and maybe even believed, I would not go back to chase bonefish in Hawaii. This video has me rethinking that.

I know it is tough. I’ve known very good anglers who have gone smelled of skunk, but I also know others who have smacked the fish of a lifetime.

My own Hawaiian experience is maybe colored by life experiences which have have nothing at all to do with bonefishing. I saw my first bonefish, to this day maybe the biggest bone I’ve ever seen, on a flat, on THE flat on Kauai. I had been looking for them all week and suddenly they were in front of me. My heart was in my throat. My hands were shaking as if I’d had a quadruple shot espresso. I sucked. I knew almost nothing about bonefishing, but I was casting at them (and being ignored by them). And then… then I heard the (increasingly in my memory) shrill cry from the shore from my ex-wife telling me it was time to come in and watch the baby.

This was the bonefish I caught in Hawaii.

Defeat… in many senses of the word.

Kauai was where we had honeymooned and it was where my parents were celebrating their 40th anniversary, bringing the whole family along.

Post separation I went back to Kauai to seek out the fish I had been called away from. I camped, cheaply and legally, a cast from the beach. I went out every day, all day, for three days. I got 4 casts. All brief. All failures. In the rain and just after the rain and just before it rained again.

Oh, and there was rain… lots of rain.

I called it quits on Hawaii. I figured I had filled up the Island state with enough failures and I vowed not to return.

But, see… I never went to Oahu. I never fished where the fish are more consistently targeted. And videos like this one from Mike Hennessy of Hawaii On The Fly… well… maybe we could head to Hawaii. Maybe I should go out there, on those more well traveled flats to try my luck against one of the monsters.

I’d either fail or succeed and by now I’ve gotten more acquainted with failure and know it isn’t so much a life-long tag. I think I’ll put it back on the list.

FYI – not everyone gets skunked in Hawaii

Yes… it happened to me on Kauai (which is a beautiful island in so many ways, just not exclusively for the fishing).  However, it went better for the writer of Alaska Rod and Fly.

Had the opportunity to spend two fabulous days on Oahu chasing bonefish with Mike Hennessy from Hawaii on the Fly.  Mike knows these bonefish.  If it wasn’t for his exceptionally keen eyes to see these fish, I would still be trying to catch one.  I would hear 12 o’clock 30ft and start casting.  The whole time I would be scanning the water looking for the fish.  The fly would land and I would hear, “long strip, long strip, let it drop, short strip, short strip, long, long, he’s got it strip it”, and bam fish on, never seeing the fish.  The only time I would see a fish, is if it was hovering over sand, or my cast would scare it and it bolted off. 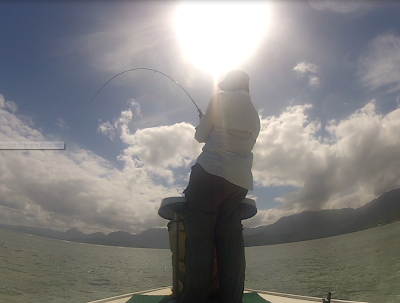 A little video of a Hawaiian bonefish shot by Mike Hennessy.  Notice the wind… a near constant companion when fishing in Hawaii and a reason many recommend up-weighting to a 9 wt. for O’io.

Chris Santella has put together a few books on fly fishing, including “Fifty Places to Fly Fish Before You Die.”  He also has some books about a hobby called “golf,” which I don’t care for in the slightest.

You may have gathered that I’m kind of interested in bonefish, so I was happy to see my Google Alert pop up with a Chris Santella story about bonefish… this time from the Aloha State.

Chris was out with Mike Hennessy and managed a very nice bone.

Chris with an O'io