What if you catch a tagged fish

You are out fishing in Eluthera/Abaco/Grand Bahama/Cuba/Andros and you hook up on a bonefish. After the customary display of the backing, you get land that fish, finding a thin piece of plastic sticking up out of the back of the fish just behind the dorsal fin.

You have recaptured a fish which has previously been caught and tagged by researchers. So… what now?

You have two options.

1) Record length, date, location, clip off the tag and send it all in to the good folks at BTT.
2) The other option, which is preferred, is recording the same information as above, but also the tag number. Then the fish is released with the tag still in. While the odds are slim, it provides the chance that the fish can be recaptured again (it has happened a few times). The collected information is mailed or emailed to BTT.
See? Easy.

Conservation / Locations — No Comments
10
May 14

This comes via Adam Marton, who I actually met in person down at El Pescador while on my honeymoon. Adam, he loves bonefish and tarpon and he loves Belize as well.

This is an opportunity coming up in August at El Pescador. Dr. Jerry Ault and Stu Apt will be there. I’d love to go too, but that is not in the cards. This sounds pretty awesome, I have to say.

Two bits of news from the Bonefish & Tarpon Trust. First… the good news.

An 11 pound bonefish was tagged in Grand Bahama. Pretty cool.

A total of 102 fish were captured, three of which had been previously tagged. Included in the 99 newly tagged individuals was a whopping 67.2 cm (26.5 in) fish estimated at 11 pounds – the second largest bonefish tagged to date in The Bahamas! In addition to bonefish, several juvenile and adult lemon sharks and bonnethead sharks were also tagged along the northern shore of the island with the assistance of guides from H2O Bonefishing, Freeport. 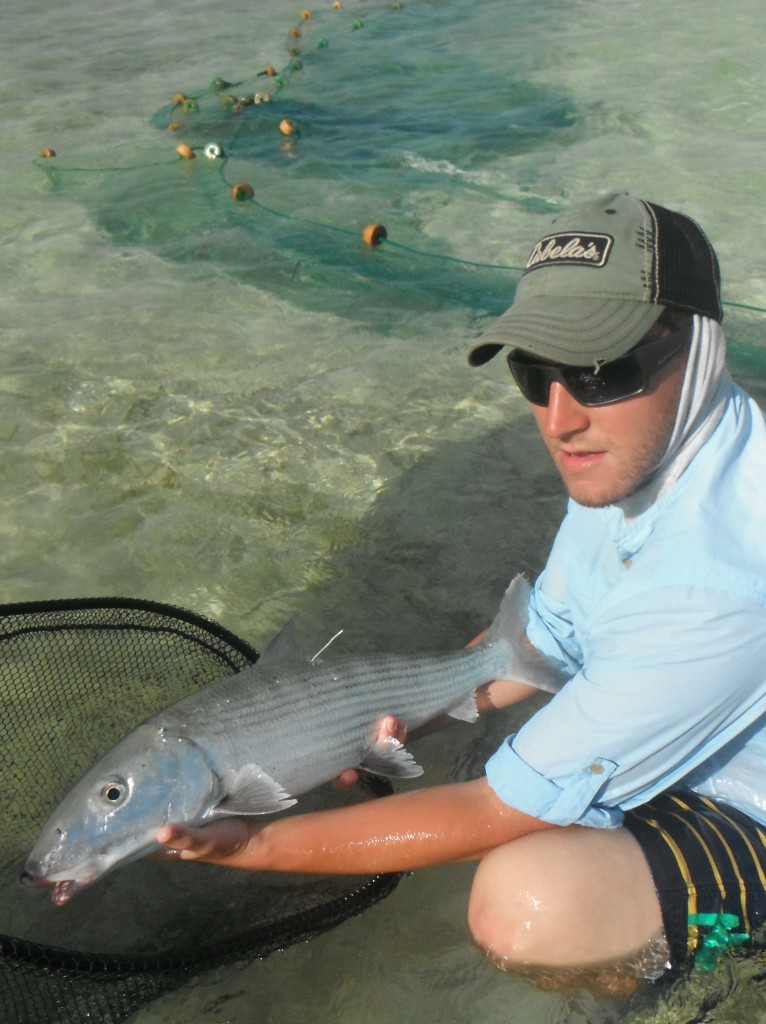 There’s a huge algae bloom in Biscayne Bay. There haven’t been any noticeable fish kills yet, but algae blooms are almost certainly not awesome for bonefish or their habitat.

My new theory on permit

I saw that Joe Gonzalez (Joe did an interview here a while back) recently caught a permit in Biscayne Bay that had been caught two times already.

Third time for this fish… that we know of.

On yesterday’s outing, to our surprise ,we caught the same previously tagged permit we had caught 6 days earlier about a mile away. Bonefish Tarpon Trust Costa Del Mar Project Permit reward tag # 07019. So we know this guy has been caught 3 times already. Looks like program is on its way acquiring relevant knowledge. Please continue to support BTT on their efforts to protect & enhance our fisheries.

From this data* I have come to an earth shattering conclusion about permit.

Here it is. The small number permit caught each year are actually the SAME permit over and over again.

Permit are picky way beyond a fault. The damn things are nearly impossible to catch and they have driven plenty of anglers out of their minds as they empty their bank accounts and shun work and family obligations in search of the permit pull. Permit are notorious for their fickle moods and ability to ruin your day and/or life.

Still, every once in a while someone actually catches one. That gives us all hope it can be done and so we go out and look for the damn things buoyed by the knowledge that someone else has done it, therefore it must be do-able.

However, what you don’t know is there are only a small number of permit dumb enough to be fooled and only those specific permit eat flies. There is just a small sliver of the overall permit population who are so gullible they eat flies no other self-respecting permit would even follow.

In my estimation** there are only about 20 permit in the world eating flies and they fall victim time and time again.

So, the next time you cast a fly at a permit and it doesn’t eat… no worries, that must not have been one of the permit that actually eats flies. See… it isn’t your fault at all.

This little guy is one of the dumb ones. It surely has been caught dozens more times in Belize since 2010.

* – OK, my “data” is just the fact that Joe posted the picture of a tagged fish that had been caught twice before. I don’t have any other solid “numbers” or “proof” or “anything” to back that up. Sometimes you have to go with your gut.

** – I should tell you that in college I only had to take one math class and it was “Studies in Modern Mathematics.”  We read books and kept journals and talked about math, but we didn’t have to DO any math. It was awesome and I got an A.

Adam Marton and El Pescador are teaming up to do something kind of cool. Below is what they are saying about it.

Did you ever want to be a Marine Biologist for a day and play a significant role in the effort to protect and understand global tarpon populations?  This is your chance to actually help answer the “$64,000.00 Question” —  Are our fish, their fish? Is it possible that the giant tarpon we see late in the summer every year in Belize are the very same fish anglers see in the Florida Keys in May and June…  In July of 2013, for the first time in history, join us for a completely unique opportunity to become an elite member of the expedition that will help unlock the answers to the global tarpon migration code.

Join Adam Marton at Belize’s El Pescador Lodge and Villas for this first ever Tarpon Tagging Expedition.  Armed with the most technologically advanced PAT & SPOT satellite tags, the goal of the expedition is to land, successfully tag and release two adult tarpon that migrate annually to the world renowned Long Key zone of the Northern Belize Fishery.  After tagged tarpon are successfully released, the expedition will be enabling scientists from the University of Miami, Rosenstiel School of Marine and Atmospheric Science to study global movements, habitat and behavior of the fish for up to 6-months.  The results of these data sets will ultimately be used to enable fisheries managers, anglers and government officials from around the globe to make even more intelligent decisions about how to properly manage tarpon populations around the world. Our combined efforts to enable intelligent decisions to be made are the cornerstone in ensuring our children’s children will have the opportunity to enjoy the Silver King for generations to come.

This is most probably a once in a life time experience to fish and advance science with an elite group of concerned anglers from all over the world.  After very careful consideration of annual migration patterns, optimal moon and tidal phases, the dates for this 7 night expedition are July 10-17, 2013. There are a very limited number of spots available for this expedition.

The 7 night/6 day Tarpon Tagging Expedition package (based on shared standard room and shared guide) is US$3,150.00/per person. To book your spot on the expedition please contact your travel wholesaler, local fly shop or Ali Flota at El Pescador, alissa@elpescador.com – 1-800-242-2017.

From the good pages over at Moldy Chum.

Adopt a Culebra Bonefish!  We need to raise $19,500 for 30 transmitters to implant in bonefish, with purchase and deployment of each tag costing $650.  Please consider Adopting a Bonefish as part of this project.  As a thank-you, we will name the bonefish tagged in your honor, and you’ll receive a thank-you packet, including a photograph of the bonefish and its personal details, (length, weight, sex when known), as well as bi-yearly updates on their fish’s status!

Of course, I did an interview with Andy.

If you care about bones, consider giving some coin to Andy so he can keep doing his good work.

Well… this is cool. A blog called “The Abaco Scientist.” Ruling.

They are tagging fish to track their movements and pinpoint spawning locations. If we know where they spawn, we can protect those places.

Today brought less-than-ideal weather for catching bonefish to tag – 25 mph winds and rain showers.  Thanks to the hard work and dedication of Buddy and Cindy Pinder, Justin Sands, and Paul Pinder of the Abaco Fly Fishing Guides Association, we were able to find large schools of bonefish on the move in The Marls.  By the end of the day, we had surgically implanted tags into 12 bonefish (6 males and 6 females).  All 12 fish were sexually mature and “running ripe”

You know where I’d love to be January 23 – 27? I’d love to be back down at El Pescador for a three day tagging tournament, benefiting the Bonefish and Tarpon Trust (ya know, if we put together a group, I probably COULD come down for this… just say’n). This is put on by the good folks at El Pescador and their stable of excellent guides. Here’s the skinny.

Belize, Bonefish… I dig it.

Why: To raise money for Bonefish and Tarpon Trust whose mission is to support research to help understand, nurture, and enhance healthy bonefish, tarpon, and permit populations.

El Pescador has worked with BTT and their tagging program since 2009. We tag permit, bonefish and tarpon in order to answer basic questions about population, growth rates and movements.

The tournament requires anglers and guides to not only measure the fish before release, but to tag them and/or genetic test them as well. This is a charity tournament benefitting Bonefish Tarpon Trust. Tournament information is available at
http://www.elpescador.com/fishing/btt-tournament
Information about tagging as well as scientific and conservation issues affecting Bonefish, Tarpon and Permit around the world can be found at www.tarbone.org

On May 31st Mike Berardi, fishing out of the Belize River Lodge with Pedro as his guide, caught a bonefish that I had caught and tagged on March 19th, the first recapture of a tagged bonefish in Belize.

Tagged bones are beginning to be recaptured.  This is a good thing. Recaptures tell us all sorts of things about growth rates and fish movements and from there policies can be developed that really help the fish.

The pearl of Aitutaki – Way to go Butch

If Aitutaki were an oyster, the budding bonefishing industry would surely be its pearl.

via The pearl of Aitutaki | PostIndependent.com.

Well, look at that, Butch Leone!  A nice little story about Aitutaki that features Butch Leone, who has started a tagging program there in his little piece of the Cook Islands.