Getting to Cuba Just Got Harder

The Trump Administration recently announced some expanded travel restrictions for Cuba, because, ya know… they are super, super, super duper a threat to our way of life and, also, he’d like to keep Florida red in 2020.

I talked with Kristen Tripp, Program Director for Cuba at Yellow Dog Fly Fishing Adventures and I asked her what the impact of this latest news would be on their program.

First, Kristen expressed her frustration and sorrow for the people of Cuba who have been through a lot, make due with very little and are certainly being hurt by some of these very backward looking policies. There’s a shortage of just about everything in Cuba, including chickens, and people really are being put through unnecessary harm.

Second, Kristen explained that things have changes since I went to Cuba back in 2012. The whole operation has worked hard to make their trips legal (read, not just sneaking in from Mexico). This new policy makes that harder, but not impossible and they’ll be trying very hard to maintain above-board Cuban trips this year and into the future. Trips are still being booked to Cuba and any already on the books are grandfathered in. Still, there will be changes and the exact fall-out is a bit still to be worked out.

Cuba was a fantastic experience for me… one of the best trips I’ve ever been on. It was pretty obvious how bad the Cuban people were hurting back then and it hasn’t gotten better since. It is all a travesty and I hope some intelligence seeps into our Cuban policy that doesn’t revolve around Presidential politics.

For the latest developments, there are few people better suited to answer your questions than the folks at Yellow Dog and Kristen in particular.

I’m not the only one who thinks this is a bad idea. So does Foreign Policy (that liberal rag). The Guardian thinks sanctions don’t work. Fortune seems to think it is a bad idea.

Cool little video on the Bonefish and Tarpon Trust homepage at the moment which tells the story of bonefish spawning patterns, uncovered by science.

We’ve long suspected some of this stuff, but now we know. Populations are connected. Most bonefish DON’T travel from Andros to the Florida Keys, but their little, tiny, adorable bonefish babies don’t stay put. They travel on the currents from Andros to Cuba, around Cuba and up to the Keys. So, that monster West Side bonefish will beget that monster Keys bonefish, just in a few generations.

Consider joining BTT this holiday season. They do great work.

Norman tagging a bonefish for BTT

This looks pretty nice. Well done. Cuba remains one of my favorite trips ever.

What do the new restrictions mean for Cuba fly fishing?

They put out a detailed piece about the new Trump travel restrictions and what it means to you, the anglers who want to go sample what Cuba has to offer.

I went with Yellow Dog’s Jim Klug back in 2012 and they had things buttoned down, even back then. Solid operation.

Trump getting ready to make it harder for Americans to go to Cuba… because that makes sense.

Looks like he won’t get rid of all the gains we’ve made, but Trump is set to make it more difficult for Americans to travel to Cuba and to do anything when they get there.

This is a policy straight out of the cold war that makes as much sense as rompers or vegan soul food. It doesn’t make practical sense.

Here are a few things our President has done to screw up fly fishing in his short time in office.

Win a frigging trip to Cuba, via Yellow Dog

I got to go once… and it was amazing. That’s where I got my first adult tarpon. It was a very special trip. You could get to feel that same feeling. Yellow Dog Fly Fishing is giving away THREE free trips to fish Cuba. What an opportunity.

“This could be you! Yellow Dog Flyfishing Adventures will be giving away THREE (3) all-inclusive fly fishing trips to Cuba for THIS SPRING. There is no purchase required, and no strings attached.

Tune in Monday, April 17th at 9:30am MTS / 11:30am EST to hear Yellow Dog’s Director of Operations, Jim Klug, announce the start to the Cuba Fly Fishing Giveaway via Facebook Live.”

Go on… win yourself a trip to frigging Cuba! 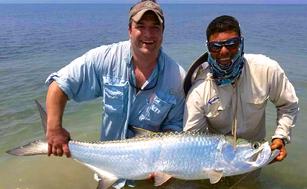 I was really, really fortunate to get to fish Cuba with Yellow Dog back in 2012 (was it really that long ago?). It was an amazing experience. I caught my first adult tarpon there, jumped and lost others, caught plenty of bones, some nice jacks and cudas and generally had the time of my life.

You want in on this? Well, there is a trip April 22-29 going to the Garden of the Queens with the Fieldworkers Club and they have openings.

How’s that for a trip?

Dr. Jerry Ault is on the trip to lead the science efforts and as one of the world’s foremost experts on tarpon, that should be a pretty educational part of the trip.

Well… Forbes ran a story about fishing Cuba and that means I need to point you there. Could the bonefish decline in the Keys be partly put on Cuba?

While the scientific research is ongoing, there is much speculation that the Keys bonefish decline may be in part due to the overharvesting of the species in Cuba. Tagging by the BTT shows no evidence of adult migrations between the Keys and Cuba. “But once bonefish hatch from eggs after spawning, the bonefish larvae are certainly capable of flowing with ocean currents from Cuba to the Keys during their 53 day open-ocean phase,” says the BTT’s Director of Operations, Dr. Aaron Adams. “So netting of spawning bonefish in Cuba could have significant impacts on how many larvae are able to drift from Cuba bonefish spawning sites to the Florida Keys.” And that could very well be the problem.

Well, the prospects of a hosted trip appear a bit thin this year and that has me thinking about maybe doing a little DIY somewhere or maybe heading back to the Keys to get spanked again.

This has been a crazy few weeks with the move up to Alameda, my daughter turning 8, a bunch of work and a near miss with the flu. So, the blog has been more-silent-than-normal. I’m still THINKING of bonefish all the time… just not posting as much.

If there is the interest, I can put it together. Just say’n.

This, of course, is putting the cart before the horse… but carts and horses are appropriate for a discussion of Cuba, as that is what you find out in the countryside.

The recently announced thaw in relations with Cuba does not translate directly into the ability for you to go fish Cuba (if you are a Yank, like myself). It does make that more likely, but there is still a long way to go on that front and you have to get an end to the embargo through congress, a place still in fear of communism as if it were the 50’s. Congress has shown very little interest in actually legislating, so I’m not holding my breath.

Even the prospect of a lifting of the travel ban has already stirred up debate about the potential impacts. I see three camps of thought.

How an opened up Cuba would impact the rest of the Caribbean is yet to be seen. I think there is a lot of fear if you are in Abaco or Andros or Nassau about what it could mean. Those places really do ride the waves of American consumer confidence and adding in a competitor the size and potential strength of Cuba could have some serious impacts, and not for the better.

It is easy to go some places and feel like the Caribbean is being overrun, but then you talk to some guides who go months without bookings, lodges that exist constantly teetering on the edge of going under, and you do wonder what the carrying capacity is, what the actual market is. How many lodges or guides can the industry support?

Cuba may (or might not) be opening up soon and I don’t think anyone knows what that will mean.