Things that bum me out… shark killing

I get an email from Field and Stream and the subject includes “587 Pound NY Thresher Shark.”

I like Thresher Sharks. They look kind of cool with the extra long tail. There is even a Thresher Shark Research and Conservation outfit.

I had a feeling I wouldn’t like what I would see, but I open the email anyway and this is what I saw…

I am not a fan of killing sharks just for the sake of killing sharks. In fact, I’m pretty firmly in the “don’t do that shit” camp. Sharks are a pretty key part of the ecosystem out there, top predators usually are, and taking them out of the system just so you can get this picture makes me a bit pissed.  Thresher sharks don’t kill people, although I did read about someone that may have been killed by the tail of one of these sharks as they were pulling it in a boat somewhere.  There was zero cause to kill the thing.

I think most fly fisherman would likely NOT have killed the beast, but the non-fly Field & Stream subscribers likely would and that is why they presented it front and center in the email. I hope more of the C&R ethic can make its way into the bait and kill crowd, but I don’t know how that will happen.

I applaud the Shark-Free Marina effort for trying to get there.

These are American Bison skulls… killed for fun, driving the Bison to the brink of extinction. 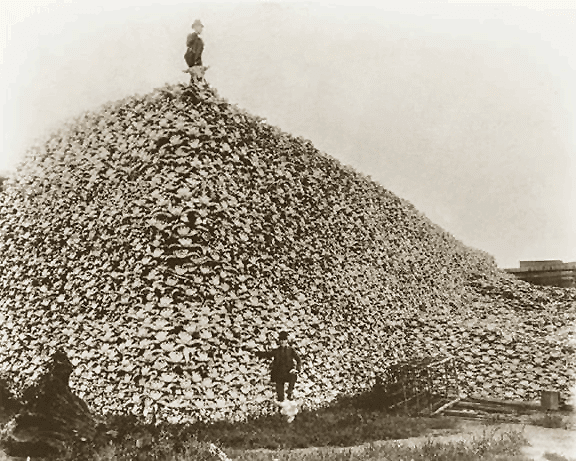 I could get behind this… Shark Free Marina’s sounds like a good idea.  Basically, it lets folks know that your marina doesn’t support the harvest of sharks.

Therefore, the Guy Harvey Foundation, The Humane Society of the United States, and various other organizations have teamed up with the Shark-Free Marina Initiative (SFMI) for a singular, historic purpose: to reduce worldwide shark mortality. SFMI certifies sport fishing and resort marinas as ʻShark-Freeʼ thereby prohibiting any shark from being landed at their dock. The SFMI team is being advised by Dr. Bob Hueter, Director of Shark Research at the Mote Marine Laboratory and John Le Coq, co-founder of Fishpond USA.