The US approved a plan to study how eroding US beaches could be made new again by, ya know, robbing other countries of their sand.

I have no doubt Skink would disapprove.

In fact, a foreign sand scheme was in a recent Carl Hiaasen book.

I would say “I can’t imagine a country in the Caribbean that would sell out like that.” but then… the Bahamas recently considered taking Chinese money to pimp their fishery and there was the one time a politician tried to sell off a graveyard in San Pedro… so, ya know… the intersection of soulless-greed and soul-destroying economic opportunity is nothing new and not exactly something confined to the island nations. 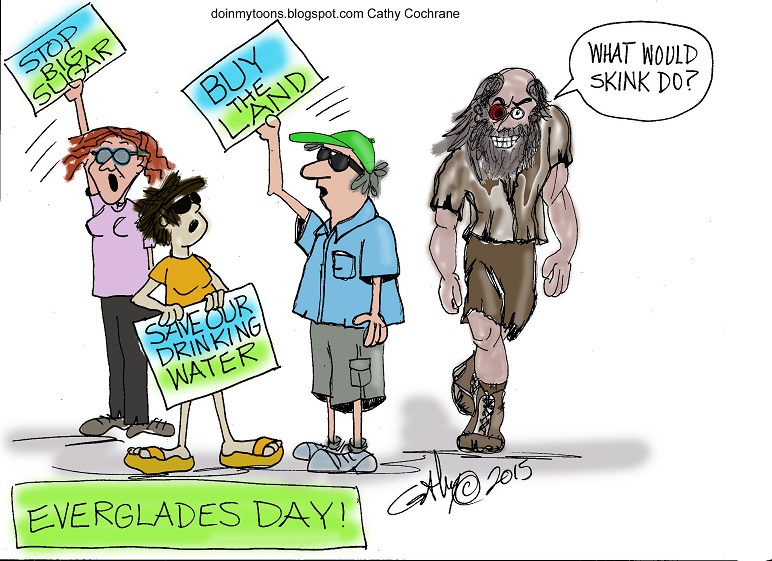 I’ve been listening to a lot of Carl Hiaasen as of late. I love Audible and listening to Carl’s (I call him Carl, not Mr. Hiaasen, we’re tight like that) stories of crime, punishment and crazy ex-governors really helps pass time during my 2,000 miles/month of driving.

His stories happen in places I either like, or would like if I ever saw them myself (and often involve, indirectly, a fly rod). Biscayne Bay, the Keys, the Bahamas. His stories are, on the surface, stories about criminals and low-lifes and the people who go out of their way to deal justice. On a deeper level, those crimes almost always have to do with plowing up some bit of mangrove or draining some bit of marshland (crimes I think deserve Hiaasen-esque retribution). He is certainly not in the pro-growth camp, with a pretty palpable dislike of tourists, snowbirds and anyone who wants to blindly own their own bit of paradise.

If you are thinking of moving to Florida… you should know… Carl Hiaasen hates you.

I understand the threat. I’ve been on Google Earth and seen the Bahamas, subdivided and paved, roads to nowhere that would destroy so many simply wonderful places. It would be so easy to lose so much. The Keys and Florida are more prone to destruction, given our efficiency in such matters.

Subdivided, but not sold… not yet.

It is a tension. I love those places. I would live in those places if I could (I can’t, Carl, so don’t sick Skink on me), but it is pretty easy to see if we all lived in these places they would be destroyed.

These places seem to always be one bulldozer, one cruise ship, one oil tanker away from going away. Maybe it isn’t hatred. Maybe it’s just fear of losing what he loves. I can understand how Carl feels… and I wish Skink was real.

I love Audible. I drive a lot, about 2K miles a month, and I spend almost all of that time in mind-numbing traffic. In prep for the upcoming Bahamas trip I figured I’d do a little listening about Pirates.

I’m listening to Empire of Blue Water, a book about the famed Capt. Morgan (yeah, he’s more than just a spiced rum). Pretty interesting to hear about sailors plying the Caribbean in the 1600’s and 1700’s. Port Royal, Hispaniola, Nassau, the Spanish Main… pretty interesting to learn a little more about the history of these places.

Other favorites on my drives as of late have been the works of Carl Hiaasen. His books are rooted in Florida, the Everglades a common character, and while they are not “fishing” books, they usually have fishing in the background somewhere, a part of the landscape. His messages are about pollution and corruption and salvation and hope. Really good stuff and I’m amazed it took me so long to find him. I mean… he was Angler of the Year in 2012.

You reading anything remotely fly fishing or bonefish related?