Flatswalker on the DIY Debate

Yesterday’s post was about the DIY debate from This is Fly. Flatswalker waded (see what I did there?) in with a thoughtful reply.

“If I can slip back into my guide boots for a minute, I can attest that I’ve seen a flat take over 2 weeks to recover after being pounded every day for a week by a single DIY angler.”

Some good stuff there. Go read it (please).

The most recent issue of This is Fly includes a debate about DIY bonefishing in the Bahamas. There are some interesting voices… Aaron Adams from the Bonefish & Tarpon Trust, Oliver White from Nervous Waters, Vince Stegura from Skinny Water Culture, Scott Heywood from Angling Destinations and, well… me.

A special fish. My first DIY fish. Not big, but my own.

Matt and I and the DIY Day

I’m sure there are people who can do it. There are plenty of people who are either luckier or better at this stuff than I am who would be unfazed by a DIY day in the Keys. They’d go out and smack a half-dozen bones and still have time for a nap.

I’m not that guy… not in the Keys.

The logistics for the Keys trip were mostly spot on. There was just one day we had a boat fall through. Not wanting to strand my fellow trip-mates, I took on the non-boat day and that meant Matt also had a non-boat day.

A tarpon hanging up at FKO.

We started off as a group having breakfast at the Green Turtle. Damn fine food there and right next to the Florida Keys Outfitters, so it was one stop shopping. As we left to head off in search of fish we felt excited, but not overly-optimistic. As we got out of the rental car and rigged up the sky was mostly blue and it improved our outlook.

This was a misplaces sense of optimism. By the time we walked the trail to get to the water the clouds had appeared, dark and heavy with ran. The next several hours were spent wading through squall after squall, casting at any nervous water we could find, which meant casting at sharks and mullet, which, sadly, were not super grabby.

It was really, really wet.

We put in some time though. We put in a good deal of time and all we got in return was wet.

At one point while wading, temporarily out of the rain but still deep in the darkness of the squall, I heard a strange sound. I wondered if the wind was making the rod or the line hum. I held up the tip of the rod to my ear and could hear a buzz.

Wisdom would dictate we left the area immediately. Foolishness kept us there, casting at more mullet. Bad move.

I’ve never been in the heart of an electrical storm before like that and looking back at it the idea of standing there with a 9 foot piece of graphite was just stupid.

We left the flat eventually and made our way to another flat. This had a bit more life on it and it wasn’t too long before I saw a dark shape move over the light bottom. It was a bonefish… an honest to god non-baby Keys bonefish. I cast. I stripped the fly. The fish lit up on the fly, followed it and then… then… the damn thing didn’t eat.

I’ve never seen a fish react that way to a fly before and NOT eat it. I was pissed. I was actually angry. I cursed. I called the fish several unflattering names, some of them in French.

It passed and we walked on.

Then, it happened again. I see the fish, my second spotted Keys bonefish. I make the cast. The fish lites up, follows the fly and then, frustratingly, doesn’t eat.

This was a hard lesson, but a critical one. It seems the bonefish I’ve been trained on, the bones of the Bahamas and Belize, are not a good proxy for Keys bones. You can’t present the fly to them in the same way, I’ve been told. You have to stop moving the fly to get the eat. I didn’t do that and I didn’t get the eat.

The whole day was tough. Wet and tough and largely fishless. I landed one little cuda and that was all that we had to show for about 9 hours of fishing.

The Keys didn’t surrender their fish easily to us. All we can hope is that the time we put in is a down payment for future inches and pounds.

At least lunch came with beer.

The Fin recently went to Turks & Caicos for round two of his DIY adventure.

the one hour of fishing you get when the sun is high enough to see fish until the first kid runs through the flat can be awesome.

Kirk Deeter just got back from a week in Long Island (the better of the two so named locations).

I just returned from a remarkable bonefishing trip in the Bahamas–Long Island, to be specific. It’s a stripped-down, do-it-yourself deal, involving big bonefish (a 5-pounder won’t bat an eye), unspoiled flats that most people don’t have the stamina to walk across in a week, let alone fully explore (I’m talking miles and miles of knee-deep water), great food and wonderful cultural experiences.

The story can be found at Fly Talk.

Truth told, this opportunity landed in my lap about the same time Cuba did and I had to decide which one to do, not being wealthy or idle. Long Island has long drawn my attention, so I’m fairly jealous I didn’t make the trip.  It still stands out as a pretty sweet DIY friendly location.

The place he stayed is the Long Island Bonefishing Lodge, a new place that is focused on the budget and DIY crowd.  The cost for a week is about $1,600, which is a fair deal.  You don’t get guides, but you get brought out to where the fish are and let loose.

The price is a good one and is probably value for money.  If and when I make it to Long Island, I’ll certainly look at this as a real option.

One option I had looked at before was staying at a hotel that was about $100 a night.  That didn’t include meals or transportation to the flats, so the $600 rate of lodging would probably easily get close to $1,600 without the certainty or pointing-in-the-right direction that this place would offer.

I love the coming together of cheap and bonefishing and while $1,600 isn’t “cheap,” it does get a bit closer to cheap than something around $4-5K.

Well, I just found a new site on the ole’ interwebs and I thought it might be something many of the BOTB readers might find really interesting.

If you are a DIYer, this is certainly, certainly worth a perusal.

Do It Yourself Flats Fishing is your #1 source on the web for DIY fly fishermen who like to chase those magical fish found on warm water flats.

Our goal is to bring you current information on locations and conditions from around the globe so you can fish and explore on your own using the skills you have developed to catch bonefish, permit, tarpon, snook and redfish  .

We will provide up to date reports on where to go, the best places to stay, travel and fishing tips and a few tricks we have picked up along the way.

The good folks from Rise went to do a little stick waving down in Acklins with Cattaraugus Creek Outfitters, owned by Vince Tobia, who has been interviewed here a while back.

My trips to Acklins Island was an interesting trip to say the least. Acklins is known for its “Do It Yourself” aspect. There are lodges to stay at but we decided to do it on our own and stay at Ivel’s B and B. Which I have to say is above and beyond anything you would expect. We booked through Cattaraugus Creek Outfitters owned by Vince Tobia. I highly recommend using them. He gives you maps and great instructions that even a novice fly fisher could use to catch fish.

I’m not going here… there is no airline ticket about to be purchased… I am not tying flies for this trip… I am not scouring Google Earth… but if I were looking to spend a month in the Bahamas right now… a full month… I might look to this place right here.

I could stay here...

It turns out I’ve had a fantasy very similar to this in the past.  One day I’m going to have to actually do this.  I guess I’ll do it when I need to do it.

How well would you get to know a place after 30 days of fishing?  I’ve begun to get a feel for some places after just a couple days.  Thirty days sounds pretty damn good.  Very good.

This River is Wild… Bonefish Movie

Go to the site… check this out.  Simply fantastic.

This River is Wild is a very, very fishy blog with a strong bonefish showing.

I know I usually give you more in these posts, but in this case, just go to the site and check it out… it stands on its own.

As I’m getting ready to head to Andros the This River is Wild blog has been spewing bonefishery as of late.  Basically… he had a really nice DIY trip somewhere in the Caribbean.  I don’t know where… maybe you do… if so, I’d keep it to myself (and then plan a trip there).

This was, easily, the best fishing I’ve ever experienced to date. In those two full days on the flats, I saw not another soul. 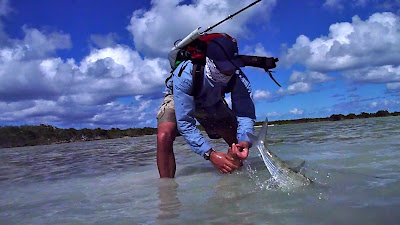 The This River is Wild bonefishology is broken down in three parts over the three days of his trip… Friday, Saturday and Sunday.  Read them.  Read them all.