On Moby Dick, Extinction and Our Current Age

I’ve been listening to Moby Dick for the past several weeks (it is a long-ish book and takes some time to get through when I’m only driving for an hour a day now). I’ve been struck by a great many things about the book, not least of which was Chapter 105 where Melville ponders if whaling could possibly ever dent the population of whales.

Nor, considered aright, does it seem any argument in favor of the gradual extinction of the Sperm Whale, for example, that in former years (the latter part of the last century, say) these Leviathans, in small pods, were encountered much oftener than at present, and, in consequence, the voyages were not so prolonged, and were also much more remunerative. Because, as has been elsewhere noticed, those whales, influenced by some views to safety, now swim the seas in immense caravans, so that to a large degree the scattered solitaries, yokes, and pods, and schools of other days are now aggregated into vast but widely separated, unfrequent armies. That is all. And equally fallacious seems the conceit, that because the so-called whale-bone whales no longer haunt many grounds in former years abounding with them, hence that species also is declining. For they are only being driven from promontory to cape; and if one coast is no longer enlivened with their jets, then, be sure, some other and remoter strand has been very recently startled by the unfamiliar spectacle.

The argument is a familiar one. The sea is vast. We are small. We couldn’t possibly have an impact on such large a creature in such large a place.

Yet, populations of many species approached the low hundreds and some still hover there. Maybe Ishmael could not conceive of exploding harpoons or fast, diesel ships. He would have been shocked at monofilament nets and lines and sonar and tracking planes. Maybe he would have changed his tune, but probably not. When you are right up against it, sometimes you only perceive the grey wrinkled wall, and not the elephant.

In chapter 105 Melville writes about the buffalo and about how, even then, it was a cautionary tale, but he fails to see how we could, with a few tweaks, play out that same opera on the high seas.

I think of the buffalo every time I see a picture of an angler with 30 fish on a stringer or 20 fish nailed up to a board. But, you know, the oceans and rivers and lakes are vast and we are small. We couldn’t possibly have an impact.

Also, the earth is colossal and we humans are so small. We couldn’t possibly have an impact on something like the climate.

One day we are going to wake up, or our kids or their kids, and find our fish all gone, and, ironically, some of our favorite beaches well under water. More water, fewer fish and all of us poorer for it.

Seems like we have learned very little since Ishmael. 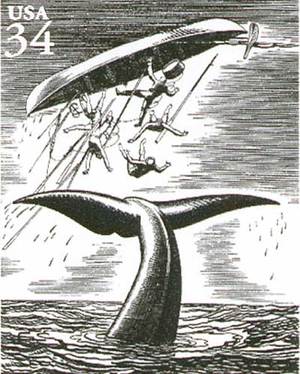 This entry was posted on Wednesday, March 18th, 2015 at 8:23 pm and is filed under Conservation. You can follow any comments to this entry through the RSS 2.0 feed. You can leave a comment, or trackback from your own site.